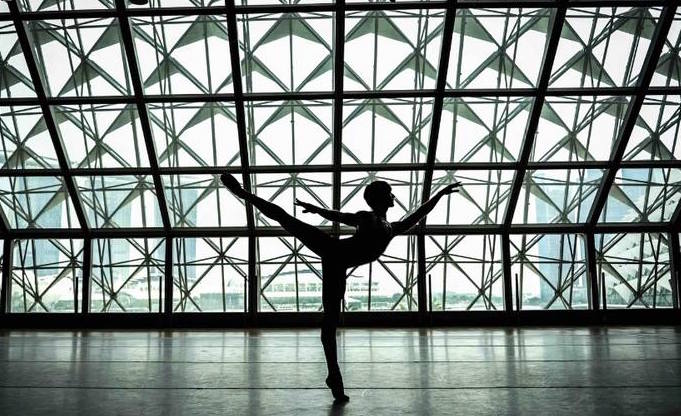 Jazmine holds her own at the barre

A gruelling Saturday morning(the usual) and I`m knackered by the end of my fourth class (Callanetics with Yana). Onto social media for the summer camp that`s running at The Foundation and I find myself being pulled aside and into the studio by my teacher, quite urgently. Not one to doubt authority, but even this seems absurd considering there is a primary ballet class going on, a.k.a. 7 to 10 year olds tottering about in pink tights and leotards.

Yana presents Jazzie and Vivaan to me, two of youngest in the class(they`re barely over 6) and they look beautiful this afternoon, poised and very in control of their dégagé derrière supported by the barre. It`s only then that she explains to me why I`ve been struggling for the past two years with my arabesque. As a taller than average dancer (that`s 6ft 4in for anyone that`s curious), I automatically assume that my movements need to match my demeanour, which, in reality isn`t too far from what one should be doing. I want to attempt all the big, jumps, leaps, turns with the highest extensions, but really, who doesn`t? However, in my pursuit of the higher grades in ballet, I`ve missed out details that should`ve stuck in
the lower grades and as a result I have had the kind of arabesque you`d cringe at considering the number of years I`ve been taking ballet lessons. It’s this correct placement of the foot to the back(shown in picture above),  that creates the space needed for hyper flexion in the spine that a good arabesque demands and also where the word originates from(‘Arabesque’ is derived from islamic art, in which rhythmic patterns are synonymous to the curve in a dancers spine). A building wont stand unless built on a firm foundation, which is why it`s essential the foot not be out to the side or over crossed at the primary level. As the strength and suppleness in the dancer increases, then only will the dégagé derrière progress and rise to an arabesque in its purest and most technically sound form. (and yes I got schooled in ballet by a six year old ballerina!)

What`s that one thing in dance that was holding you back and how did you overcome it?