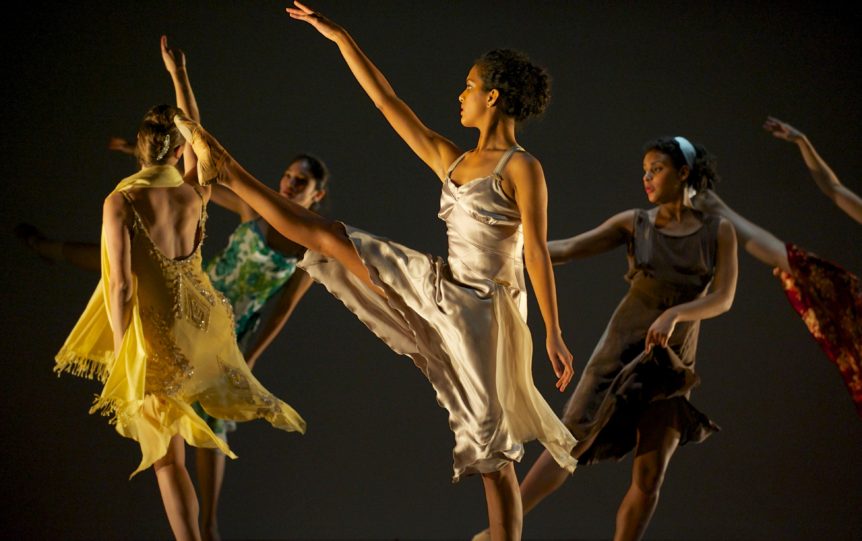 Dance is a complex marriage of the body and mind. While it is easy to mistake dance as being purely physical, there is an immense amount of thought that goes into each movement. From remembering sequences of steps to recalling corrections and thinking about artistic quality, thought plays a big role in dance movements. When she sets particularly confusing combinations, Yana sometimes asks us to say them out loud. “If you can’t say it, how can you hope to do it?”, she questions. To a great extent, when I trained with Yana, I learned to rely on naming movements. I developed an inner voice that spoke to me as I danced. My dancing, learning process, and inner voice have evolved a great deal since I began working with Yana in 2005 and through the last five years of studying and dancing in the USA.

Dancing with the Yana Lewis Dance Company was one of the most significant phases of my life in Bangalore. What started as an extracurricular activity quickly consumed my mind and body, and became an indispensable part of my existence. Classes, rehearsals, and performances were fulfilling and all that I looked forward to during high school. Dayita during her days in Yana Lewis Dance Company

As a detail-oriented person, Yana’s approach to dance always made sense to me. Yana demands technical precision and movement that appears effortless and joyous.Ballet with Yana pushes dancers to learn (seemingly infinite) names of movements. In her classes, there is less visual demonstration than verbal description of movement combinations. Dancers develop a direct connection between the names of movements and the kinaesthetic experience of performing the movements. The word glissade, for instance, becomes more than just a French term; it is an embodiment of the act of gliding along the floor.

As I neared the end of high school, I felt the need to explore dance on a deeper level. So, I moved to the USA to do a BA in Dance and Psychology at Mount Holyoke College. I was thrown into a dance programme that was equal parts ballet and modern dance, the latter of which I had almost no experience with. Ballet in college was familiar yet strange. I had grown up studying ISTD with Yana, and at college the focus was on the Vaganova method. Steps were sometimes named differently and combinations rarely followed the patterns I had grown to expect. On the other hand, modern was an entirely new ballgame. There were irregular signatures, inversions, pedestrian movements, and movements that did not have codified names. In many classes, the most confusing part for me was that my teachers often demonstrated combinations and did not necessarily name the steps as they did so. Instead, they would count, sing the rhythm of the phrases (“da da dum”), or simply move in silence. My inner voice, intent on naming all the movements, could hardly keep up with the speed at which I had to learn and perform phrases.

While I could continue my habit of labelling movements and still be successful in ballet classes, the same was not true in modern classes. The diversity of classes meant that I had to strategise how I learned combinations. I began to use a mix of visual, verbal, and musical cues to absorb movement phrases and  also took the opportunity to start painting with broader strokes. I concentrated on lines of energy, presence, and spatial awareness, confident that my technical foundation would fall neatly into place.

After I graduated and moved to New York City, I continued to seek out varied styles of dance. I took Cunningham, ballet, Gaga, Modern, Countertechnique and improvisation classes to broaden my horizons as a dancer.Working in different genres of dance has given me strength, diversity, and the sense of freedom and confidence to explore new pathways with my ever-expanding dancing toolbox. Moving back to Bangalore after five years has been a strange transition, a feeling of renewed homecoming. Returning to ballet with Yana after having exposed myself to so many different styles of movement allows me to understand it in a new light. While the names of movements are still important, they don’t necessarily occupy all my attention as they used to. Words, images, and the buzz in my body accumulated from diverse styles and numerous teachers continue to resonate in my movement. My inner voice has developed to incorporate all this information. It is most certainly multimodal.

However, whatever style of movement and on whichever continent I dance, there is still always one constant—Yana’s inimitable voice resounding in my mind. It saying something perfectly typical like: “Double pirouettes, Dayita!” Dayita Nereyeth is a dancer, writer, and cognition nerd based in Bangalore. She danced with the Yana Lewis Dance Company from 2007–2011, performing ballet, jazz, and contemporary work. In 2015, Dayita graduated from Mount Holyoke College with a BA in Psychology and Dance. Dayita has performed in repertory pieces by Merce Cunningham, Delfos Danza Contemporanea, and several others. Most recently, she collaborated with Sarah Locar Barral and Les Ballets Nomades et Sonores in New York City to create the dance company’s first piece, Heimatlos. Dayita is currently dancing, teaching, and exploring the arts scene in Bangalore.