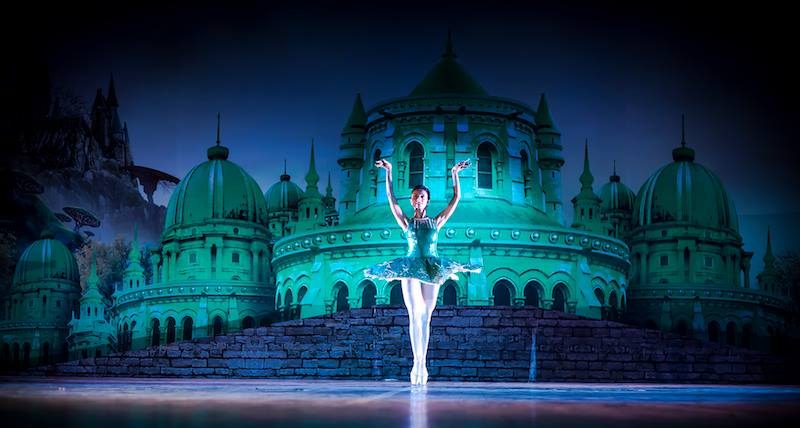 Twenty-one may seem like a little too late to start ballet, but ballerina Sushmitha Margad will shake her head vehemently in disagreement and say ‘but I did’. Few would possess such determination to walk away so gracefully from discouragements and doubtful glances thrown at them, and focus on their goals and what they had set out to achieve.

After starting her professional career in dance with the Yana Lewis Dance Company in 2003, today, she is one of the few established ballet soloist/performer in the country. She  is equally qualified to shoulder the responsibility of nurturing young dancers in the world of ballet at the Lewis Foundation of Classical Ballet. Her journey is one of that of determination and meticulous planning, be it about juggling between her IT job and dance classes or saving up her salary to attend the Vocational Exam in Athens, Greece. Sushmitha during one of the ballet shows

Sushmitha started her dancing journey with Bharatnatyam under Guru Nirupama Rajendra during her early childhood. She started training under Yana for Jazz and later on, joined the Yana Lewis Dance Company. The transition from Jazz to Ballet has been rewarding for this young dancer, who decided to take up ballet to better her dancing.

The world of Ballet

“ I saw that other dancers in the company were stronger than me, had beautiful lines with such powerful movements and a deeper understanding of their bodies. Irrespective of which dance form they were learning, what they all had in common was that they all regularly took training in ballet. I started ballet to improve myself as a dancer”, she says. During one of her pointe work classes.

Many do not realise that ballet has a very structured approach and intricately detailed work. It combines strength, stamina, flexibility and the ability to gracefully perform complex, technical movements. It is very artistic yet physically very challenging.

Fortunately, Sushmitha possessed a quality which seems to be slowly disappearing among today’s dancers – perseverance.She started at the very back of the line among other dancers and took a few many years to work her way up to the front. Soon, she found herself missing classes at college and making excuses to friends and family just to attend her ballet class.

“ When I was first told I was getting my own pair of pointe shoes, it was a pleasant surprise. I adored pointe work, but I never thought I would make it that far”, says Sushmitha. She remembers very vividly how in her first pointe work class, she felt that her life would change forever. She would be on her toes dancing away beautifully and gracefully. She had watched with awe as Yana tied the ribbons of the shoe around her ankle, feeling special and thankful. However, a few minutes into the class, all that feeling vanished into thin air. She saw what lay ahead for her in her journey. “ It was nothing like I imagined. I wanted to dance beautiful and float on my toes but I was left feeling miserable. My toes were going numb with pain, every rise up onto pointe felt like a mountain to climb. I desperately wanted to take my shoes off. I thought I would never dance en pointe.” Sushmitha during one of the photoshoot

Every pointe class was akin to a mountain staring at her , growing taller and taller as she progressed. Bruised feet,numb toes and aching body were her companions. Yet, it is her grit and commitment to the art form that would eventually make her climb that mountain as far as her legs would take her. “Pointe work classes became a part of my weekly schedule. One day when we were working on pirouettes, after several attempts, I finally could muster up my courage to do a pirouette on pointe. That was the moment I felt like I was flying and I finally fell in love with pointe work”.

Under the mentorship of the Artistic Director Yana Lewis, Sushmitha took her first vocational exam in Intermediate ballet in Athens, Greece in 2012, and then went on to receive the Associate in Imperial Classical ballet from the ISTD in Rome, Italy in 2015. Sushmitha says Yana left no stone unturned. They covered every step in the syllabus thoroughly, working on every possible combinations. Yana gave her very detailed and personal corrections. Initially the classes were full of technical corrections and slowly as she progressed closer to the exam , she acknowledged how this journey helped her realise the importance of consistency in mastering ballet.

Four days of travelling meant four days of no dancing or training.Now, that is a very big deal in the ballet world. However, the lack of studio didn’t stop her and her friend from practicing on the way to Greece. The waiting lobby at the airport; under an orange tree inside a public park,  anywhere and everywhere they could move became their dance floor. All that hard work payed off when she was awarded a distinction in the examination. Sushmitha during her time in Italy for ballet exams

The second examinations posed even more challenges this time. A teaching exam meant that she was not only going to dance and demonstrate but also set exercises, break down and teach movements, talk about corrections and injury prevention and other teaching related subjects and also instruct the pianist what to play as the exam progressed.

“As I entered the exam studio this time alone, I didn’t feel out of place. The exam included a lot of demonstrations and  discussions with the examiner. There was almost no scenario that my teacher or my teaching experience had already not put me through which gave me the confidence . The exam itself felt like a lovely experience”, she added.

With a 91 percent score, the highest among those few Indians who took this examination, we knew what she meant.

This November, this Indian ballerina will prepare for two major challenges. One will test her ability as a dancer and the other as a teacher. She along with Yana Lewis and Elina Wisung  will shoulder the responsibility of organising the first ever ISTD dance examination in Imperial Classical Ballet for her students. She will have to prove that her students are at par with the examination standard with respect to the artistry and technique in ballet. She will also have to prove her mettle as a performer when she will take the vocational advance 1 ISTD examination. The role of a teacher at the Foundation

“Students often ask me if it is painful to dance on pointe . Yes, it is painful but it gets better with time as you get stronger, and you will start enjoying it. There will be blisters and pain but there will be moments of miracles and it is worth it all. It is beautiful, it is magical, for me it is as real a dream can get”.

Fun facts about this Indian ballerina

Peanut butter is her ‘saviour food’.

She loves to get foot spa

She has won the best employee award at her IT company

She is scared of  over-sleeping

Mathematics was her favourite subject in school

If not a dance teacher, she would have still pursued a teaching career

Does dance inspire you ? Tell us .

One response to “Journey of an Indian Ballerina”