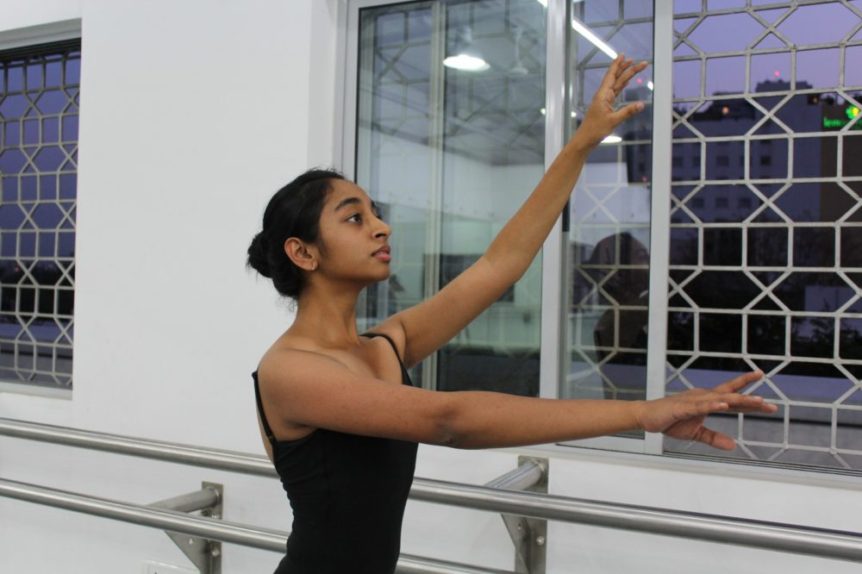 How did your journey in ballet begin? When did you join TLFCB?

When I was 6 years old I started ballet at a school in Canada. Two years later I shifted to Bangalore and immediately went searching for a good ballet school here and found TLFCB.

What inspired you to take up ballet?

Every time I watched a ballerina dance, either on TV or live, I would be enamoured by their grace and delicate yet strong movements and aspired to dance like that one day.

How has the journey been since you began learning at TLFCB?

The journey has been very rewarding and enjoyable. The year I joined I took part in a production based on C.S. Lewis’ Narnia and have been a part of 4 of the biannual productions. I’ve even danced with YLDC for the Mysore Dussera in 2014. I’ve always loved and looked forward to performing. Performing in each of those shows has been a great experience and I guess I’ve learnt more and grown as a dancer with each show. From an old photoshoot with TLFCB

What role has ballet played in your life?

Ballet has been a big part of my life and has been an enormous source of happiness for me. Ballet has been a type of escape for me, worries and struggles seem to melt away when I come for ballet class. I can go through my days so much easier when I have class to look forward to. Once you’re in class there’s so much to think about and focus on technique and corrections, you learn how to give your absolute best for each class that you don’t space in your head to think of worries and daily problems.

How has ballet impacted other aspects of your life?

Ballet has always been a priority for me in terms of extra curriculum, but I’m really interested in other things like writing and football and it has often been difficult to balance ballet with these other activities and academics. In terms of athletics ballet has helped in increasing my stamina and strength. I’ve seen this is to be true for other kids as well.

What are your thoughts about the work done in class and how effective is it to you?

Again, once you’re in it there’s no space to think of anything but the work set for that class. I literally have to think about everything! All the corrections and technical aspects to apply it to each exercise. The teachers are also really great and they help you understand exactly what you have to do and you’re pushed to do your best. Once, you’re in class it’s as if you are in a different zone, It’s just you, your teacher and your classmates all focussed on dancing and there is no other experience that could make you feel happier. Samanvitha Danda as the Mayor of Emerald City

In terms of corrections there’s always something that has to be worked on, keeping my knees straight, gripping my turn out and inner thighs, not rolling my feet, elongating my arms, honestly the list goes on. There have also been periods when I’ve been completely demotivated, where it feels like I’m not progressing, so that’s been a struggle I’ve had to work with but it didn’t matter because doing ballet whether I’m doing it right or wrong gives me a sort of happiness that nothing else can and that’s what’s important (it’s always better if I’m doing the right things though).

What has helped you stay committed?

It’s impossible to give up on ballet. There was always something that kept me from throwing the towel for good. During my 10th and 12th boards I had taken a break, it was the strangest time for me. All I could think of was getting back to dancing. I have always had an urge to jump and point my feet and use my muscles and try and turn out my feet. Such actions have become so ingrained in me that I find myself doing them at the oddest of times like when I’m studying or in the middle of a football match. Staying away from ballet has become such a strange thing now because it’s such a big and important part of life.

Here is a poem written by Samanvitha

She jumped up high but landed turned in

She pointed her foot but bent her knee

An aching ballerina was all she could see

She jumbled up her jetté

She was frantic in her fouetté

So she skipped her way onto a grotesque arabesque

As the music played, she fumbled and fell

And she could tell that things weren’t going so well

As she surveyed her situation, she didn’t cry or weep

Or let her mind spiral into a niche, dark and deep

Instead, she would dream

She dreamt of a girl with elegant arms and floating feet

Which would sublime into tantalizing turns and beautiful beats

She delivered poses with perfect poise

She synchronised her steps effortlessly into the musical parts

As she pirouetted her way into the audience’s hearts

Someday she could be that girl

Someday soon she would be that girl

She had to translate her mind’s strength to her muscles

Harden her heart and hold her head up high

Determination would exude out of each of her corpuscles

And she would get stronger with every try

She would give each correction equal attention

She would finish each enchaînement with a gentle smile

Certain that it had been worth the while

Soon she would have the perfect attitude

And find her being swell up with gratitude

She found herself become a better dancer

7 responses to “One Step at a Time with Samanvitha Danda”