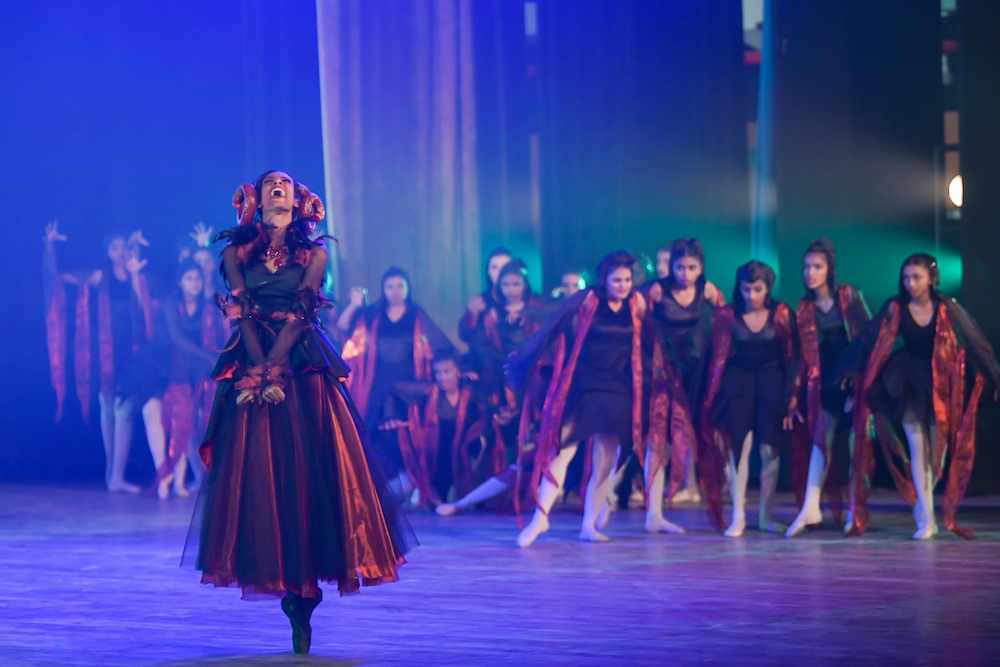 In conversation with Ramya Manikam about starting ballet as an adult. Ramya takes ballet wherever she goes

What made you start taking ballet lessons?

My first introduction to ballet was as a child, going through my grandmother’s books on health and medicine that featured several chapters on ballet. I was instinctively drawn towards what I read and saw and believed it was something I would love. The opportunity to learn ballet in the cities I grew up in were virtually non-existent. At best, it was very loosely taught from the angle of ballet being something of a novelty to introduce a new style rather than as a committed practice in a classical sense. Still, stage and sport remained a consistent priority for me through school. The 5 years I spent in college studying architecture gave me very little time for anything apart from academics, however. This created a large void that I was determined to fill as soon as I graduated.

I moved to Bangalore for work and once I got a little settled in, I started looking for jazz dance classes. I hadn’t really even considered ballet because I had long given up the idea of being able to learn it. That’s when I came across the TLFCB website. I was not only surprised to find a serious ballet school in India but one that was willing to take adult students! Unfortunately the classes were full so I enrolled for jazz while I waited almost a year to get a spot in one of the ballet batches. During that time, the jazz training gave me a good understanding of what ballet would help me achieve and I wanted it more than ever.

What were your thoughts  about starting as an ‘older’ beginner?

I didn’t really give too much thought about being an “older beginner” despite being aware that I was in a class among much younger students. I was busier feeling frustrated over how much stamina and flexibility I had lost during my physically idle years in college, as well as coming to terms with how limited my knowledge of dance technique really was. I also probably didn’t immediately realize how late I was getting into the game. I didn’t have the choice when I was younger, so it was now or never. I was just generally grateful for the opportunity. Dancing at the beach

How has it affected other aspects of your life?

In the big picture, it’s been a blast, but I have had to make some heavy sacrifices. My social life took a big hit as I started living with very different priorities from my friends and peers. I have had to invest a considerable part of my income to be able to practice beyond a level of this just being a weekend hobby. Living by myself while juggling the demands of a very hectic job and a very hectic dance form has pushed me to the brink of burnout many times.

I haven’t traveled or taken holidays half as much as I would have liked to, over the anxiety of missing out on valuable instruction which becomes a tougher choice to make when you start this late. I have made these choices without regret, however. Ballet has been a perfect indulgence of all the things I am drawn to the most – music, art and athletics. There’s no other activity I’d rather be doing even at the point of absolute physical exhaustion.

As a creative professional, I inevitably draw inspiration from the subjects I am passionate about. Ballet has opened a new dimension of how I perceive things and express myself. The daily internal dialogues I have between trying to create stimulating spaces and practicing dance has helped cement my personal image of who I am creatively and what art means to me. I wouldn’t have been able to arrive at this place without having my limits pushed the way a discipline like ballet pushes you. What has been the most difficult aspect of starting late?

Disclaimer: This is not as much a pessimistic lament but more of an acute understanding of how much the art demands from me the more I progress and achieve.

The aspect I personally struggled with the most was digesting the fact that I was too late to pursue a career as a ballet dancer. I think this point is often misunderstood and underestimated by people outside the industry or those who are new to it. Ballet is not just a difficult, intricate art form. It has evolved over centuries to become the pinnacle of human physical achievement. There is a method to a lot of the madness within the industry. Missing out on the experience of allowing your body to mature with the movement, making the most of your natural facilities and catching physical kinks in time, is to miss out on developing important micro-muscle memory which is the devil in the details between merely flitting between grand positions and actually nailing them.

When you start as an adult, you are almost trying to crash-course your way through the most intense of disciplines. Irrespective of the amount of time and dedication you pour into it, there are parts of you physically that are pretty much set in stone. There are days when I feel like my body is a rock and it takes me an extra mile to catch up with my classmates who’ve been training since they were kids. You hit a wall where sheer strength and determination alone isn’t enough.

These views might seem rigid and debatable, but I state them based on a personal understanding of what the extent of my ambitions would have been as a professional ballerina. With this understanding, trying to make sense of why I still do this with so much priority and effort has been a struggle sometimes. What has been your greatest triumph or achievement in your journey?

At this point in time, I think my biggest achievement was being able to reclaim my identity as a dancer and performer, that I had lost after I graduated from high school.

2019 brought the moment of truth when I was awarded my first lead role as Carabosse, as well as the opportunity to teach and stage my own choreography in a piece I titled “Kaleidoscope”. I’m not sure I can sufficiently appropriate the words to describe the extent of growth and fulfilment both these experiences brought me. It was a year of self discovery and of personal liberation physically, mentally and artistically.

8 years ago I stepped into my first ballet class unsure of whether I even belonged there. Today that feels like a different life as I wholeheartedly prepare to embrace the agony of surviving an advance class.To have spent the better part of my life devoid of ballet and yet to be unable to imagine a future without it, to be able to affirm “this is what I hope to achieve, this is what I work towards and make sacrifices for and it brings me joy!” … I think arriving at this moment of reconciliation is invaluable whatever path you choose.

What would I say to others who are thinking about starting classes?

It is the Gospel truth that there is no shortcut to learning ballet and there is no underestimating it. When you enter adulthood you’ll find that life is suddenly running at an accelerated pace and to be patient is treated less like a virtue in a world that demands instant gratification. Regardless of the hurry you may be in, you cannot rush ballet instruction and it is important to be able to grasp that reality in order to align your goals.

I think most adults, myself included, have at some point mixed confidence, ambition and delusion and struggled to understand where we really stand in terms of physicality and technique. Any classical form of dance involves profound internal work  beyond simply understanding “the feel” of it. At this stage, growth involves forgetting your age and adult brain and tuning into a younger, more teachable part of you. This is easier said than done, but it can be a very rewarding mental exercise. It ultimately boils down to what you make out of what you receive.