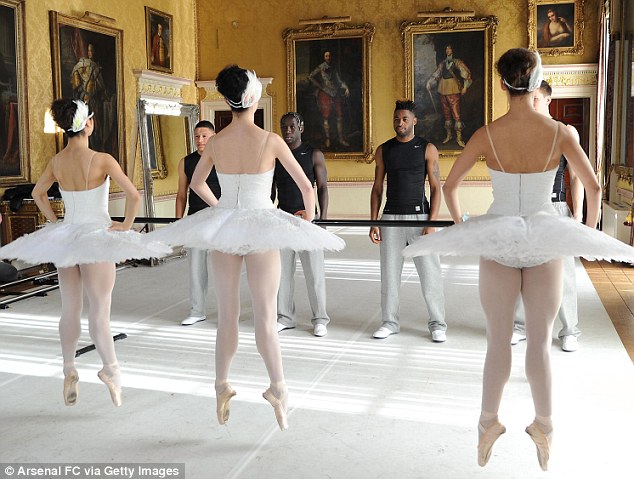 “Ballet dancers need the same level of endurance as these athletes”, I said proudly while watching the Rio Olympics 2016. My friend laughed. In spite of my best efforts to explain why, he dismissed it simply with a wave of his hands.

But it is true. How could I show that there are similarities between say, a ballerina and a football player ? How could I show that ballet is not just about pretty tutus or satin shoes ? To my luck and his dismay, I could come up with a list of world renowned athletes ( think football, basketball , baseball boxing and bodybuilding ) who took ballet classes.

Be it about improving endurance levels or increasing strength and flexibility, their experience about ballet is sure to clear any misconception about ballet being easy.

An inductee in the Pro Football Hall of Fame and four times Super Bowl champion, Swann is known for his in-the-air jumps and catches .He attributes them to his early ballet training.

“ People don’t understand the physicality of dance. Rhythm, timing, body control, coordination.The finish of one move is also the preparation for the next move. I started developing an ability to feel very comfortable in the air. Some of the catches I made that you see in the highlights, I am up in the air catching a pass. Body control comes into play, the dance ability comes into play and boom, it’s all there”, says Swann. He started introductory ballet in his early 20s with the University of Georgia. What did he think of ballet ?

“ Ballet is probably one of the hardest things I have done, almost like MMA. People don’t give it a lot of credit and think it is easy. But it is very difficult. For athletes,  you use muscles you really don’t use and ballet is something I really respect”. Rio was not only trained in ballet , he even received a scholarship to join the Central School of Ballet, London.  Ferdinand says ballet helped him develop as a footballer as he had to improve his balance and timing.

“It’s elegant and you have to be flexible”, says this athlete. “ ballet is harder than anything else I do”, Steve says. This athlete is known to have followed a rigorous training routine to master boxing techniques. What most people don’t know is that he employed a ballet instructor as part of his training routine because of which his performance improved. This is what he shad to say about his classes  with ballet trainer Marya Kenneth.

“I’m a lot more flexible since I’ve been working with her. I don’t get hit with the shots I used to get hit with. It’s not that I didn’t used to see the punches coming; I was just too stiff to get away from them sometimes.”. Willie “always wanted to learn ballet”. Let’s just say he got his wish come true when he made his debut with the Chicago City Ballet for a fund raiser. His quote on ballet is the double edged sword I often use to those who say ‘ballet is so easy and for girls’.

“The hardest part,” says Gault, “was turning my feet out. And there’s no way I can get right up on my toes. Now, that takes real athletic ability.I’m not real hung up on the macho aspect of football.Ballet isn’t a sissy sport.”

Barry sanders, Scott Williams , J.R.Reid, Rick Fox and King Rice;…. the list of athletes could go on but I  had  already convinced my friend.

Finally, here is the cherry on the top. I just couldn’t resist it. When anyone says ballet is not ‘manly enough’ , I just say his name and the response ranges from ‘really’ , ‘you are kidding’ to ‘wow’ ! Yes, Arnold Schwarzenegger, the epitome of ‘the manly dude’ did take ballet classes. Dancer Marianne Claire taught him in the early 70s. His ballet  training  helped him perfect his body positions during his bodybuilding career . He has had many feathers to his cap since then but to me , he will always be the Terminator ( his ever famous movie role as a robot) .

Speaking of movie actors, Ryan Gosling, Patrick Swayze, Christian Bale and many more can tell you how ballet is not at all a ‘girly thing’. Finally, here is what Jean-Claude Van Damme known for his hollywood action movies had to say about ballet.

Finally, football Arsenal fans would have recognized the header image. Here is a interesting  commercial video  of them experiencing…. ballet!

You want to try it yourself to believe it ? Join the Adult ballet classes at the Foundation.